Since Zabbix v5.4 settings of all scripts used in Actions have been moved onto separate section (Administration -> Scripts). It's needed to define them here before referring to them in Actions.

Currently (in v6.0) the script can be one of several types (exactly "Script", but also could be "Webhook", "SSH", "Telnet" or "IPMI"). At the same time, settings of Action (Configuration -> Actions -> Trigger actions -> some action -> "Operations" tab -> property of specific Operation) have only difference between "Send message" operation and any other type of operation without any further differences between type of scripts.
For example: if script has been defined as a "Webhook", then anyway it's necessary to fill a "Target list" field (despite the fact all webhooks always run on Zabbix server only). It's impossible to save configuration with unchecking "Current host" field and non-selecting something else in the "Host" or "Host group" fields. Moreover, saving configuration with the default settings ("Current host" is checked), then it displayed as "Run script <script name> on current host"; although really it is a webhook running on Zabbix server.
Screenshots screenshot-2022-06-09_01 – screenshot-2022-06-09_03 illustrate this issue.

It would be great to take into account a real type of scripts during visualization. 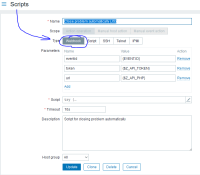 Votes:
Vote for this issue